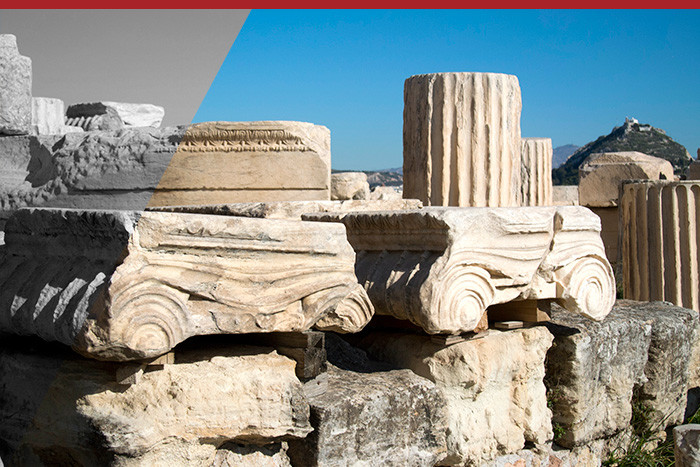 The Greek myths are full of heroes, men and women who lived a long time ago and dealt with the gods directly – often, it appears, on equal terms. The most popular of the hero stories were the stories of Herakles the hero who was not only a man but a god.

There are many tales of Herakles. Picture, if you will, a man of great energy and drive, plenty of good will towards people and a tendency to take the most direct path to any goal. He is good-humoured, generous and courageous. On the other hand, compared to other heroes like Odysseus, Perseus and Jason, he is not very clever, nor particularly charming. His lack of subtlety is symbolised in his choice of the club as his preferred weapon. He has a violent temper and an enormous appetite. He is macho man.

Contemporary European images of the hero continue to follow the classical Greek masculine model, personified in Herakles. Heroes are fighters. They overcome obstacles, escape from captivity, transcend suffering, kill monsters, tame the wilderness, save people, are pathologically competitive, and leave a trail of wreckage behind them. It is a perspective that has been the source of a great deal of the achievement of Western society. It is also the source of much of the damage that we continue to do to the planet and each other. It can be argued that Western culture has suffered from a hero-pathology for some time. In collective as well as personal life we have been too much inclined to think of the goals of life in terms of ‘mastery’ and ‘achievement’ and to ignore the random destruction that goes with this perspective. This is not to suggest that we should abandon the hero-image. We should, however, avoid being stuck, personally or collectively, in what is essentially an adolescent way of being.

Within Australia, Alan Bond and the Bond corporation in the 1980’s epitomised this way of being. Bond’s self promotion depicted him in the role of ‘businessman as hero’, the ‘little Aussie battler’ (though he was British) fighting for a place in the world against the stupidity of the bureaucracies, the mediocrity of the general populace, the lack of vision of the politicians and the malice of the ‘big guys’. It is a myth that bore little relation to the reality of Bond’s business dealings – which were dominated rather more by the pathology of Hermes, the thief and liar. Nevertheless, Bond was successful for a decade in identifying himself as a hero, and the companies that he controlled mirrored Bond’s personality in their culture.

An organization with a strong Herakles culture sees itself as a hero, with a quest to fulfil, a mission to perform. There are giants to wrestle, dragons to slay, maidens to rescue, tyrants to overthrow, rivers to divert, mountains to flatten, forests to clear. There is a sense of having to do all this single-handed. Leadership in such an organization is given to a powerful individual, whom the members do their best to emulate. Organizational structures are minimal. The chief executive leads by example rather than by giving orders or by consultation. Subtleties, ethical, intellectual or operational, are not greatly respected. The organization is dominated by an individualistic macho ethos, which values the ability to crash through, by sheer strength, to endure pain, to resist higher authority, to aim at the impossible. There is little sense of social obligation or responsibility. However, the hero can be extraordinarily generous. The hero (whether an individual or an organization) does what he does because he chooses to, not because of the directives or expectations of others.

The Herakles organization is beholden to nobody. Within such an organization, individuals who resist orders are likely to be admired rather than chastised. The organization has the same resistance to being pushed around. Since it recognises no one’s right to tell it what to do and since it has little capacity for reflecting on the consequences of its actions, it can be randomly and unintentionally destructive. The life of Herakles is characterized by the inadvertent slaying of innocent people. It is also characterized by a constant battle against the various manifestations of the earth mother. In the contemporary corporation the pathological Herakles culture may be revealed in a reckless destruction of the natural environment.