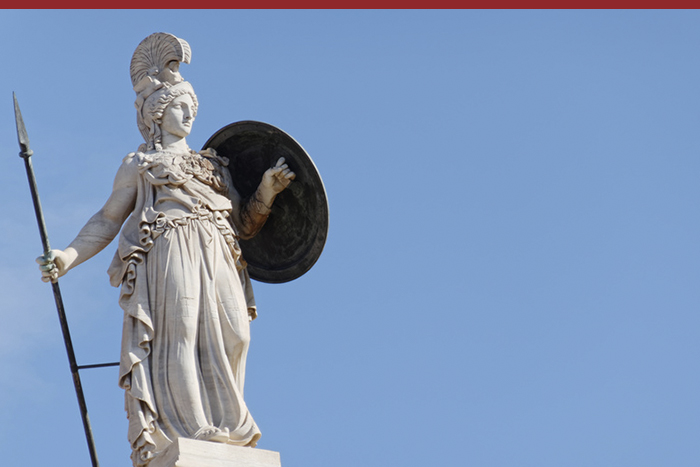 Athena eventually emerges in classical times as a goddess of civilization, of household arts and crafts, especially weaving, and of the defence of civilization against those who would destroy it. More than any other god, she represents a point of balance between the male-dominated and autocratic culture of the Greek invaders and the concrete, matri-centric culture of the people they conquered and assimilated. She represents normality, consensus, balance. In political terms she is democracy.

Whatever her historical origins, Athena is certainly a daughter of the patriarchy. She represents the female principle accepting and accommodating the rule of the father, and making the best of it. In contemporary terms she represents liberal feminism, acknowledging the realities of living in ‘a man’s world’, demanding an equal share of power and competing for it on the same terms as men. In this she is in complete contrast to Artemis, who wants nothing to do with the world of men.

Ancient Athens also showed the pathology to which an Athena organization is vulnerable. For all the rhetoric of equality and participation, it was an organization that limited participative decision-making to those thought capable of it – actually a minority of the population.

Women, resident aliens and slaves had no part in it. Pride in their civilization gave the Athenians a justification for imperialist expansion. The conviction that they possessed an advanced culture and advanced political structures provided them with a high-minded rationale for subjugating others less fortunate and enabling them to share in the benefits. In addition, the decision-making processes of the radical democracy proved too cumbersome to operate effectively in emergencies and left the way open for a takeover by shrewd politicians who knew how to manipulate the system while outwardly respecting its forms, or by demagogues who gained power and popularity by appealing to the people’s baser instincts.

Some form of the Athenian fantasy appears in the vision or value statements of many current organizations still. We say still, for over the last decade these references are starting to diminish in frequency.

Organizations committed to the values of Athena give a great deal of attention to sharing power. Horizontal structures are preferred to vertical ones. Decisions regarding policy and practice are perceived as decisions of the organization as a whole rather than of the chief executive or ruling clique. People are respected for their technical and professional skills.

Athena has had a significant influence on design thinking and agile thinking of late. You will find her well honored in start-ups and other forms of innovative organization.

The preferred way of developing strategies or dealing with problems is a collaborative approach, one that recognises and utilises different kinds of expertise – built on diversity. The preference for group-based decision-making comes from a sense that this is the best way of making decisions, not from any desire for intimacy.

James Surowiecki’s work “The Wisdom of Crowds” is an act of homage to Athena.

People in such organizations believe that decisions should be made coolly and sensibly, after full debate, with full attention to practical implications. And they should be properly documented. Too much emotionality is frowned on. Women may be prominent and valued members of such organizations, but only in so far as the feminine perspective that they bring is compatible with the ethos of the organization. Women who wish to challenge the essentially masculine assumptions of the organization by approaching it from the perspective of Artemis (ideology) or Demeter (nurturance and protection) may not be welcome at all. Athena may represent the independent, resourceful, clear-sighted feminine, but she accepts the ground-rules laid down by Zeus. She does men’s work in a men’s world. And she probably power-dresses.

Organizations dominated by the egalitarian Athena culture may experience a peculiar pathology when it comes to decision-making. There may be so much insistence on complete debate, so many committees to consult, so many people whose voices need to be heard, that it is impossible to make any decision at all. We have seen this of late in a number of organizational settings where significant energy has been devoted to social skills development and leadership development using a relational focus. The end result is often that the work done in such environments becomes vague, ambiguous and diffuse, and the end game sees the bankers coming in to take over.

Alternatively, the chief executive may be forced to take on a Zeus role and make a decision that over-rides legitimate objections and leaves many people resentful. Sometimes an organization may have an espoused ideology of power-sharing but actually restrict the joys of power to an elite group who are considered worthy of them.

Where the Athena culture has arisen within or alongside a strong Zeus culture, it is common in times of stress to find Zeus’ resuming of his rightful place in the scheme of things and being welcomed by a strong and silent sub -group who had no legitimate voice under Athena’s reign. Organizationally, this is manifest in statements such as: ‘It’s about time we got some order and authority back in here’; ‘At last the boss is exercising the authority he should have all along’; or ‘Thank goodness someone other than a committee is starting to make some decisions around here’.

A consultant bringing an Athena perspective to the study of an organization will be interested above all in the way power is shared, the way the members at all levels have a sense of owning the organization and its works. A good organization, from this perspective, will be one that is highly professional in all its undertakings, which values its human resources and counts on them to deal with crises with cool grace and precision.