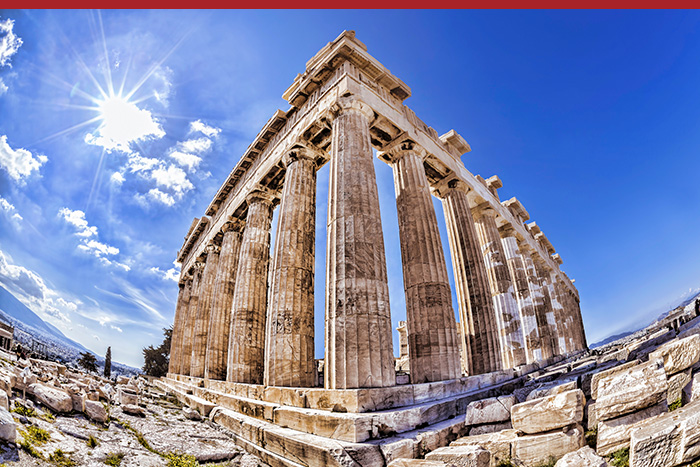 Hephaistos represents the paradoxical relationship that exists between pain and beauty. He as a Greek god, personifies the agonies which people are willing to endure for beauty, the years of boring practice which go into seeking perfect form in any craft, the aching muscles and the calluses, and even the long-term physical injuries, which accompany the pursuit of beauty for the dancer, the athlete, the sculptor and the musician.

Like Aphrodite, Hephaistos is an Asian god who was incorporated into the Greek religious culture. He became the god of the forge, and was imagined labouring in his workshop deep below the palace of the gods, making beautiful and useful objects for the other gods to enjoy.

Two things distinguish Hephaistos from the other gods. He is the only ugly god among the twelve Olympians. And he is the only god who works. When he was born his mother, Hera, found him so repulsive that she hurled him from the sky down to earth, so that he was crippled by the fall. He is associated in the myths with a race of little people – pygmies, dwarves or leprechauns – who live and work in caverns below the earth.

Hephaistos is obsessed by beauty. He slaves in his workshop making beautiful ornaments for Aphrodite, hoping by this means to win her love. To avoid the need to relate to real females, he surrounds himself with beautiful robot-girls made from precious metals, who care for him and do his bidding. Hephaistos identified entirely with his work, but he does not seem to have been entirely happy in it. Many of his stories show him as resentful of the low status given him by the other gods, who actually regarded him as a bit of a joke.

Organizations with a strong Hephaistos culture believe in work for work’s sake. Work is perceived to be a moral good. To get aches in your bones, blisters on your hands, sweat on your brow and soot on your face (literally or metaphorically) gives you satisfaction and distinguishes you as a person of worth in the organization.

The chief executive caught up in the Hephaistos archetype is proud of his or her trade or craft, still identifies with it, and enjoys the opportunity to show that he or she is still prepared to get engaged in the real work of the factory floor or professional practice. The Hephaistos enterprise is proud to produce tangible goods and services, has little interest in being slick and fashionable. Many organizations that worship other gods, have one or more Hephaistos sub-cultures within them. After all, somebody has to do the work while the other gods are off having a good time.

Recently I had occasion to meet one such sub-culture. I was introduced to a group of people from EMESRT – the Earth Moving Equipment Round Table. Made up of some of the largest mining houses in the world it is a global initiative that engages with key mining industry original equipment manufacturers (OEMs) to advance the design of mining equipment to improve safety, operability and maintainence beyond standards. I had occasion to speak with 4 of its senior members recently and repeatedly I heard phrases such as “ we are only interested in doing things that work”, “we are unassuming professionals and what we do is important”, “we work out of sight and out of mind”, “this work matters to us and it should matter to others”, “the bosses will never know how many lives we have saved”. I was deep inside an Hephaistos culture as I listened to these words.

An Hephaistos sub-culture can often be found in the filing room or the engine room, usually situated in the bowels of the building, in a group of workers who are simultaneously dedicated to their work and resentful that they are stuck with it. Looking for Hephaistos? Why not try the groups of highly trained professionals and technicians in government departments and other public service agencies. Whilst they may feel unloved and under-valued they, nevertheless, seem to take extraordinary pride in the quality of their professional work or craft. We are thinking particularly of groups such as photographers, surveyors, engineers and IT professionals.

Organizations within service professions like teaching and nursing often have strong Hephaistos cultures, with their members convinced that they work inordinately hard, feeling resentful that no one really appreciates them, complaining about their oppression to any one who will listen, yet remaining dedicated to their task just the same. The Hephaistos culture is a task culture, not much interested in power or personal advancement.

Hephaistos cultures are not very good at looking at the big picture. It is Hephaistos who impels so many of the world’s scientists to dedicate their lives to making weapons (actually one of Hephaistos’ specialities). The character of ‘Q’ in the James Bond string of novels and movies reflects this side of Hephaistos.

The Hephaistos culture is introverted (Jung) yet outer-directed (Trompenaars). It is sensate and feeling (Jung), emotional (Trompenaars) and masculine (Hofstede), with low uncertainty avoidance and a long-term orientation (Hofstede). Status in an Hephaistos organization is gained through achievement (Trompenaars), i.e. through hard work and skills, rather than given automatically on account of one’s social class or family relationship.

The main threat to a Hephaistos culture seems to come from Hermes, the god of the marketplace. Organizations which once prided themselves on their ability to build beautiful bridges, produce beautiful goods or provide beautiful services, and which identified themselves with the excellence of their crafting, are under pressure to treat their products or services as commodities whose only value is their market value. This is most obvious in recent times as both the United States EPA (Environmental Protection Agency) and NASA struggle to retain their resource base, their staffing, their work and their relevance in the face of an Hermes onslaught from the current US Administration, aided and abetted by Zeus.