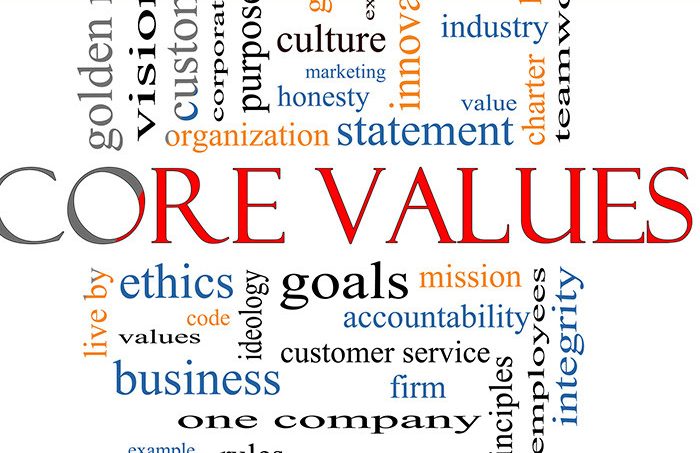 Values based leadership has been the norm for over two decades in high performing organizations. The introduction and push to a values based-approach in an organization is in most cases a successful means of increasing a company’s effectiveness. It gives greater clarity of the company’s identity and expected behaviors along with guidelines for achieving their purpose and operating principles.Time and again however, some organizations cause far more damage than good to their company’s productivity or organization’s efficiency and effectiveness. Morale can be compromised as well.

At the heart of it is the way the values are introduced and maintained, to the point where (in some cases we have observed) the organization and its people were better off before values ever entered into the company’s language.

It is rare that the manager introducing the values initiative did not have good intentions. Often in such cases, they seemed to lack the comprehension and skill to know just how powerful and influential values can be, both in a positive or negative way depending on how they are introduced and institutionalized.

Time and again when we visit organizations and walk into a middle management office or talk to front line employees there is (typically) a laminated chart on the wall listing the companies core values and sometimes associated behaviors.   When questioned an employee rolls their eyes and refers to them as once being the ‘flavor of the month’, the ‘buzz words’ that were dutifully posted on the office wall and subsequently forgotten.  Until of course the employee saw management acting in such a way, or they were treated in such a way,  that violated these values! Then the employee becomes very aware of the stated values and behaviors. Such instances run the risk of making a mockery of upper management and the organization as a whole in the minds of the employees.

If an organization is going to introduce values, then it needs to be quite specific about what each value looks like in action.  What “integrity” looks like to one person may be completely different for another.   So when introducing a values-based initiative, it is valuable to outline the behaviors that are expected as expressions of these values. But more importantly leaders must follow through should these not be adhered and above all else be prepared to live these values themselves. Otherwise the result will be disillusioned, frustrated and often angry employees who can take their talent and skill elsewhere though perhaps not before morale has been dented productivity and the company’s culture has been contaminated.   Introducing values and behaviors is also about transparency. It means leaving egos behind and creates a basis for accountability for behaviors which demonstrate that the values are lived.

To take an extremely successful example of a company where values were introduced and institutionalized….  (Dupont, personal discussion with Dick Knowles, 2008 ), there are many key factors that were present.

Now this isn’t just pie in the sky wishful thinking of how we’d like an organization to behave.  It happens.  Not just with Dick Knowles, but with a vast number of organizations we have worked with led by people who are committed to business excellence both in productivity and employee satisfaction.   These are some of the learnings we see time and again and wish to share with you as a warning, of how values can cause so much damage to an organization when used incorrectly.