If we dare! The possibilities of sustainable leadership 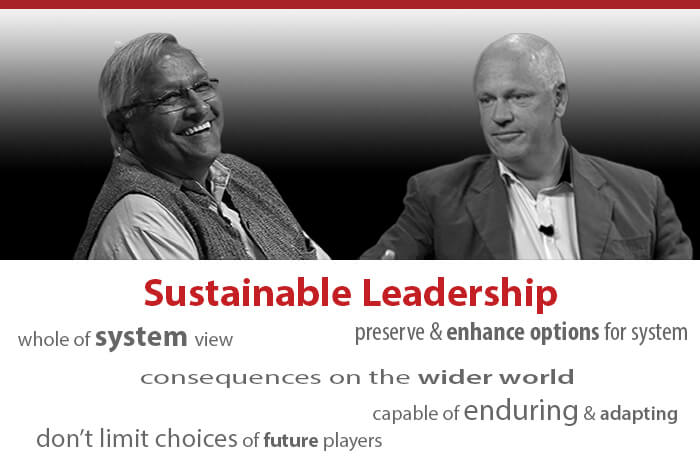 Sustainable leadership occurs whenever any one does anything that satisfies the five criteria initially outlined in our October paper, A Stake in the Ground.

Action or leadership that is sustainable

Dalmau Consulting was fortunate to be active once again at the Ci2013 Creative Innovation  – Asia Pacific Conference in Melbourne in late November. There were a wide variety of thought-provoking speakers and stimulating conversations but two speakers in particular were ‘stand – outs’: great examples of leaders who lead sustainably, but more than that, their work fosters sustainable leadership in other individuals and in many communities.

Jason Drew, a London born entrepreneur now lives in South Africa. He sold all his industrial revolution business interests in 2008 and has since started or invested in a series of businesses focused on sustainable outcomes. Sanjit “Bunker” Roy, is founder of Barefoot College in Rajasthan, India that  helps rural communities becomes self-sufficient.

Bunker Roy and Jason Drew stand out. They are both larger than life, as are their endeavours. It would be foolish to imagine that in order to exercise sustainable leadership you have to do something on the scale described below

Sustainable leadership occurs whenever any one does anything (small or large) that satisfies the five criteria noted above. It might be

Taking ‘the piss’ out of slums in Africa

Jason’s investments in sustainable businesses range from fly farming (raised on waste) to produce protein for animal feed as a replacement for fish harvested from the sea thereby replacing pesticides with sterile male mosquitos grown on an industrial scale. He also has a project that is literally “taking the piss out of the slums of Africa”.

The lack of toilets in the slums of Kenya has been an on-going health and social issue. Through his investments Jason now manufactures pre-fabricated concrete and steel toilets. These are provided to women in the slums, now over 200, and the waste (solid and liquid) is collected and removed each day. The women charge locals a very modest fee to use the toilet, making on average four times the average earning of slum dwellers. The removed solids are composted and sold as fertilizer and the liquid waste is also turned into a valuable liquid fertilizer for local coffee farmers.  A unique process, by which the urine is left in the sun for several months to remove volatiles and breakdown any genetic matter, becomes 5:3:1 (N:P:K) liquid fertilizer as a result.  Part of its real value is that is can be fed directly into the drip irrigation systems of the coffee farmers’ and doesn’t need to have water added, a scarce resource.

Slum dwellers no longer have to defecate in the street and this improves sanitation and health. So far, at least 200 poor women, have been provided with jobs and good income to support their families. Waste is recycled into usable fertilizer, substituting the need to purchase it from overseas and the liquid fertilizer reduces the need to use local water sources to dilute fertilizer purchased elsewhere.

knowledge to bring solar electrification to their villages and then continue to maintain it. Women from as far afield as Africa and Afghanistan have been taught by these women (who do not share a common language) and they have taken the skills and know-how back to their own villages.

Grandmothers, reliable and experienced, despite their illiteracy, have a new and vital role in their community and the community itself has clean, renewable, electric power so that they are no longer reliant on the scarce supplies of wood. Children are now able to do school work in the evening, after working in field and shepherding animals during the daylight hours creating more useable time for a range of other economic and social activities. Out of this work we have seen innovation in the form of simple solar stove technology developed by the women themselves.

How did they do it?

Both examples clearly demonstrate sustainable leadership through meeting the five criteria outlined above.

The empowerment of women, both in the Kenyan slums and in the process of solar electrification of villages has increased the capability of these people who are passing on the economic, social, health, welfare and environment benefits to their families, communities and region and ….  it has engendered leadership to emerge and flourish in these communities.

A Stake in the Ground, describes strategies for building capacity for sustainable leadership and clearly these have been built system-wide in these two examples. The locals have,

The list of possibilities of how you might exercise sustainable leadership is endless if the venture satisfies the five criteria outlined. Bunker Roy and Jason Drew help us to see just what might be possible if we dared to think this way.

If we dare! The possibilities of sustainable leadership